Добавено 1 година преди от Rocky
12 Прегледа
** (Disclaimer: Video posted strictly for educational and information purposes only) **
Police officers in Indiana mistakenly took an actor on a movie set for a real robbery suspect. Indiana State Police were called to the Back Step Brewing Company in Crawfordsville on Tuesday evening for a possible robbery in progress call after someone called 911 to report seeing a masked man with a gun enter the back of the building. When officers arrived from the Crawfordsville Police Department, they saw a masked man coming out of the door at the eatery with what appeared to be a gun and ordered him to drop it. Officers fired at the man, later identified as Jeff Duff, striking the building nearby and not hitting him. Duff then dropped the gun and took off his mask before telling officers that he was filming for a movie. 'The bullet went by his head. It was very close,' Phillip Demoret, an actor said. 'I don't want to think about it. If it had hit him, we'd be having a whole different conversation. Thank goodness he wasn't.' ISP Sgt. Kim Riley told the television station: 'When the police said drop the gun he turns toward police pointing the gun if you don't know it is a movie scene how are you supposed to react.

'I know if it was my situation. I probably would have done the same thing.' Indiana State Police then figured out that Montgomery County Production was filming at the location, but no one, including the bar or the production company, had notified police or businesses nearby that filming would be occurring. In addition, the gun Duff was using during the scene was a prop. Kodi Swank, co-owner of Montgomery County Production, released a statement: 'There's lesson to be learned on both sides of the spectrum from us as a low budget movie company and from the police department on their quick reaction. 'I'm very grateful that the police department did their job to the best of their ability with an unknown situation.' The shooting remains under investigation by Indiana State Police. Crawfordsville Assistant Police Chief Jim Sessions said the officers involved in the shooting are on their days off. 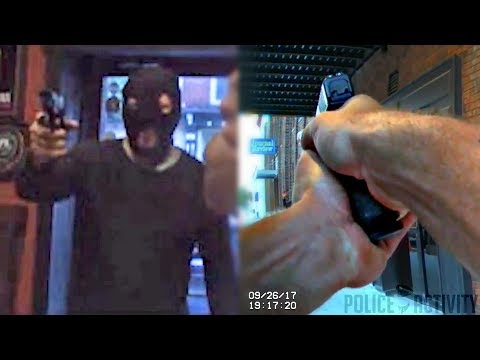 ** (Disclaimer: Video posted strictly for educational and information purposes only) ** Police officers in Indiana mistakenly took an actor on a movie...